A new addition to the Creosote guitar collection

Over the last several years, my friend Brother Ray Lemelin commissioned me to build a series of guitars with a particular design and all with neck wood from a large chunk of wood that he provided me with from a 100 year old telephone pole from British Columbia. God knows where he found this stuff, but the maple is flamed, dark, and has veins of creosote running through it. Thus it was named the Creosote guitar series. The very first one I built was called the Creosote Slide. It was simple. A maple neck, mahogany body, and maple top cap. I transplanted a 1950's Supro lap steel pickup , bridge and controls right into the body. It had banjo tuners and was set up for slide and chording. Ray loved it, and so did his friend and fellow bluesman, Tim Williams.
The next one I built was for Tim and it had some modifications to it per his request. Two vintage Teisco pickups from the '60's, a Bigsby, a roller bridge, and six drop-d Schaller banjo tuners. You can view pictures of it if you go back further on my blog. Tim loved it, still loves it, and has toured with it as his main electric guitar. As a matter of fact, I haven't been able to see it since he was given it over two years ago.
Fast forward to today and I have a brand spankin' new five string bass. My first, and maybe only, bass I've ever built for longtime friend of mine and Ray's, Bob Richardson. Bob has been patiently waiting for his bass for longer than I would care to admit. This year though, Bob must have been VERY good, because Santa brought it for him. Same body idea as the guitars but for a bass. Same woods. A fine set of Hipshot tuners. Bartolini pickups, and an Ultra Deluxe heavy duty bridge. CTS pots, Sprague Orange Drop capacitor and lots of love. Unlike the recent guitar projects I've been doing from some pre-made bodies and necks, this bass was handcrafted from scratch starting with raw blocks of wood. It was worth it, and lots of fun. 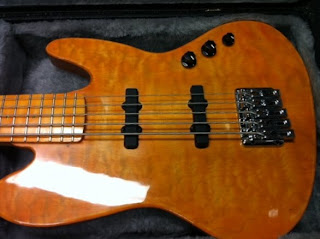 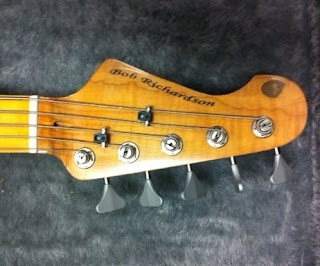 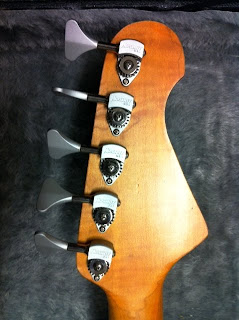 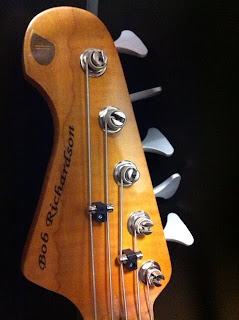 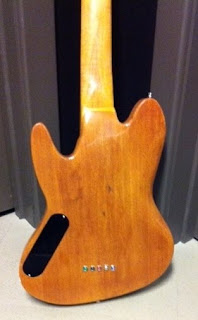 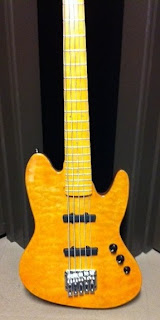 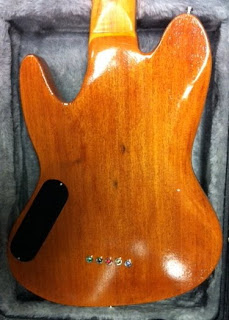